Lulu M Sylvian is one of the authors in the new A Cursed All Hallows Eve anthology. You can read a spotlight interview here. 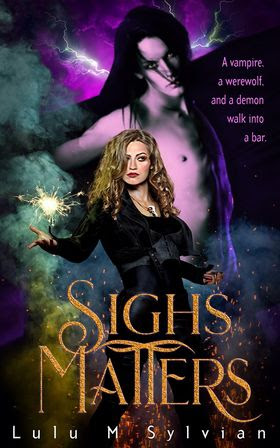 It’s Halloween and my goals are to party, get a little buzzed, and possibly hook up with some hardbody. But my attention keeps being pulled back to a group of furries, and my friend has joined the harem around some guy dressed like an anime wet dream.
Things go from sexy hot to hot mess when I discover my friend is missing, and that furry cosplay, isn’t cosplay. Also, there’s a reason hottie anime guy is so hot, he’s an incubus.
I need to save my friend, not blow my fingers off in the process, and decide which one of these guys that keeps kissing me I want to end up with. But they do work well together. It’s going to be a tough choice.

“This demon isn’t Christian, and that cross isn’t blessed. But it is silver, and supernaturals don’t like silver,” Vlad said.
I toyed with the cross. “Is that why you don’t like it?” I asked Vlad.
He gave me a sharp nod.
“What about you?” I asked just as I placed the cool metal against the exposed skin on Biker’s forearm.
The car swerved and he clamped his other hand over the spot I touched. “What the fuck did you do that for?”
“Oh, like that hurt you,” I snarked in reply.
Biker lifted his hand, and underneath I could see the angry red skin, and blisters forming.
“No,” I started. “No, no, no, no. This isn’t happening.” This wasn’t real. The silver on that cross did not just burn the man driving my car like a bat out of hell across town to who knows where and I was willingly going along for the ride.
“Stop the car. I need to get out.”
He glared at me and kept driving.
“Stop the car,” I screamed and began beating my feet and hands against the car. Thrashing as if I could make him stop.
The tires squealed and I could smell the burn of rubber as he stopped in the middle of the street. I scrambled to undo my belt and open the door. I fell out of the car and was on my feet and running. I knew enough back in the club to not take a drink I hadn’t seen prepared myself, but… Oh God, there were two of them, what if they had distracted me? The demons were just a hallucination. I had gone with them to one location, and I was willingly going to a second. How stupid was I? Never let them get you to a second location. Oh crap, I was gonna die. One of their friends had Vin. I would never see her again. She would never meet some nice man her parents approved of. I didn’t want to be killed on Halloween. What a stupid cliché mistake that would be.

Where can readers find Sighs Matter?

Hello and welcome, readers! We have Lulu M Sylvian here with us today. Lulu, thanks for visiting us.
How long have you been a writer and how did you come to writing?
I’ve been published for 3 years now. I grew up drawing and creating characters. Maybe for a comic, maybe for future stores? I’m not sure. But I wasn’t that kid that wrote stories. I didn’t start writing down my characters until I was older. And not until those characters became much more noisy and demanding that I document their stories.
Tell us about your title featured in: A Cursed All Hallows’ Eve
Sighs Matters is about a girl who falls in with the wrong crowd on Halloween night, only to discover, they really are the right crowd for her. At first she’s drawn to a group of hotties who are showing off their exceptional furry suits. She can’t help but flirt with them as her friend takes off to join the harem forming around a super hottie dressed like an anime character.
It turns out they aren’t furries, and her friend has attached her self to an incubus.
Other characters that get involved are a not-quite-billionaire vampire, a Bollywood wanna-be, and a swarm of mummy-like demons. Things get explosive when incendiaries are brought into fight off the bad guy.
It is a reverse harem romance, so she ends up with her happy for now, and a bevy of new boyfriends.
How did you come up with the storyline?
The tagline “A vampire, a werewolf, and a demon walk into a bar,” came to me first. I spent a few weeks trying to figure out what it meant. The wolves are the ones who let me know about their costumes first. Then I knew about the beautiful demon. To be honest I didn’t expect him to end up doing what he does. He surprised me.
This was very much a “ride along and document,” type of story told by the characters.
What inspires you to write?
My characters. Somehow they show up and have these situations and they want their stories told. The process really does feel like I cast out the need for X-type of story and the characters respond. That’s how Sighs Matters happened.
I also have characters who are hanging about but they haven’t attached themselves to a story yet. And then suddenly I’ll have a story that has to happen (like part of a series) and that character will step up and claim the spot. They can really change the direction of what I may have thought was going to happen.
The idea can come from anywhere— a call for submissions, a dream, a plot bunny meme on Facebook— but until a character shows up and takes that idea, nothing really happens.
Tell us about your other books:
I mostly write paranormal. I love shifters, but I also have a thing for male strippers. I do write contemporary, that’s been limited to the strippers until recently when I started with some rock star romances.
Holiday Strippers are short rom-com stories that started off with The Twelve Stripper of Christmas. I try to make sure I have a new stripper short every Christmas season.
Legatum is a family saga series that revolves around wolfshifters and the impact genetic science, and long dead enimies, have on theirsurvival and finding romance.
Second Endings is a paranormal series with ghosts, psychics, and love that spans the veil between life and death. A definite spin on the idea of second chance romance.
Wolves of Wet Waterfalls is the first mini-series that takes place in the miniscule magical municipality of Wet Waterfalls, Wyoming. Werewolves, demons, and withces populate the world of this reverse harem series.
Ballad Ares is my first rock star romance. I have three planned, no series name yet, but these contemporary romance stories do revolve around issues dealing with recovery and substance abuse.
Where can readers find you?
Website: www.lulumsylvian.com
Newsletter: www.lulumsylvian.com/newsletter
Facebook: http://www.facebook.com/lmsylvian
Come play with my Facebook group: Lululandia https://www.facebook.com/groups/519202371904484/
Instagram: www.instagram.com/lmsylvian
Amazon Author Page: https://www.amazon.com/Lulu-M-Sylvian
Bookbub: https://www.bookbub.com/profile/lulu-m-sylvian
Goodreads: https://www.goodreads.com/LuluMSylvian
Pinterest: www.pinterest.com/lmsylvian
Twitter: www.twitter.com/lulumsylvian
About the Author:
Bio-engineered to be the only redhead in a generation of blonds, Lulu feels that “aliens” may actually be the best answer for a lifetime of being asked, “Where did you get that red hair from?”
She did not come into writing from years of scribbling words on paper. Her background is rooted in visual arts and making pictures. Encouraged to make those pictures out of words Lulu began writing just to see what would happen. What happened was two full-length manuscripts in three months.
Lulu cannot ride a horse, a motorcycle, spin a hula hoop, or play roller derby. Yes, she has attempted all of those, even if it has been decades since she’s been on a horse or a motorcycle. She embraces the crazy that comes with the one little genetic mutation and attempts to live up to the reputation that proceeds her as a redhead. Lulu would like to apologize for her contribution to the hole in the ozone layer from her use of hairspray in the 1980’s.