Kiki Howell is one of the authors in the new A Cursed All Hallows Eve anthology. You can read a spotlight interview here. 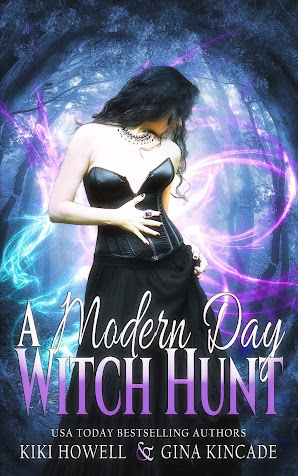 Kamillia, an author of paranormal romance, is accused of being an actual witch by an ambitious group of businessmen with a dark agenda. A man who resembles one of her fictional characters, an alpha male hero, randomly appears at her door offering her protection.

Luca is an immortal Watcher from the River of Light. Sent to Earth to help Kamillia, whose true heritage has yet to be revealed to her, Luca is caught off guard by the fighting spirit of the woman and the way his human body betrays him while in her presence.

When Kamillia is attacked, and all the lies she’s been told come to light, she and Luca are forced to join together. Despite numerous obstacles, they need to overcome the evil of many centuries blocking a portal under a mysterious church on the edge of town.

On Halloween night, she will have to face her past—as in a past life—in a big way. Only then can she return to what is left of her life, with or without this stranger who has captured her heart but cannot share her future

The hefty breeze pushed the small, blue, rolling waves into white, jagged peaks with the same urgency he felt inside as he sat gazing out upon the vastness of the water. Leaning against a weathered retaining wall with an audible sigh, Luca glanced behind him at the blue-gray haze over the small town cityscape silhouette. The pollution, a mixture of smoke and sky, presented itself as an omen of great significance to him. He knew the buildings, along with some of the houses beyond, already held within them the inhabitants he’d both come to protect and come to battle. In his five hundred years as a Watcher, the energy of the Earth had changed, negatively affecting the human condition.

He viewed their existence from his realm on a daily basis, a place just beyond this one, a small segment of space that served as a window to the world. From his perch there, each city had its own fundamental haze blurring its buildings and beings. This mystical force field, referred to as The River of Light, or simply The River by Watchers such as Luca, formed an energy grid covering the earth.

The grid could be seen as a matrix of light, sound, and colors forming geometric patterns around the planet. Humans had attempted to observe such patterns in the study of Sacred Geometry, but the immortal Watchers watched over and recorded the changing spiritual energies of history from their posts at The River. Ever shifting, the ebbs and flows of the negative and positive life energy swirled and moved over the varied landscapes of the Earth much like waterways. Therefore, it was critical for him to witness when certain changes emerged, what energy the events causing the changes added to the collective conscious of the world, and how the energy impacted the flow of The River. Recently, this city in the northeastern part of the United States had grown darker and darker until it choked under a bout of polluted smog-like energies. To give an ironic but truthful view of history, this was the first time Salem, Massachusetts had looked this bad. Even then, the frenzy of the only spiritual pollution inspired by the hunters during the witch hunts hadn’t darkened things to this extent. The residual energy that lingered here had been built upon since and currently required his intervention.

On Earth, back in true human form, a Watcher could see through this haze to the true souls of the people revealed to him in the colors of their auras. Both systems simply mirrored each other. Just as the human body had a meridian system with vital life force energy flowing through it, the world had a similar system of passageways through which the collective life force flowed. They not only mirrored each other, but affected each other, too. On the astral plane, the integral energy of human thoughts, words, and deeds combined into the mystical force field he kept watch over. Although he’d been sent to Earth many times before, a greater sense of foreboding gripped him this time. The places where the lines of the energy grid intersected and channeled to the earth had become blocked at alarming rates here these last few days, warning of impending danger. At portals such these, the energy proved stronger in its effects on the surrounding area.

Where can readers find A Modern Day Witch Hunt?

Hello and welcome, readers! We have Kiki Howell here with us today. Kiki, thanks for visiting us.
How long have you been a writer and how did you come to writing?
I have been writing since I was young, in a way. From my earliest books, when I didn’t care for a part, or the ending, I re-wrote the book in my head when daydreaming, or trying to fall asleep at night. At some point I decided to simply try to write my own story. I wrote a lot in high school and college, but then I got married, became a mother, and all of that went to the wayside, outside of my love for reading, for a long time as I fulfilled another dream of being a stay at home mother. But all children grow up, and thus as they needed me less, I found my way back to writing.
What inspires you to write?
Oh, lots of things, but mostly I call it therapy. A lot comes out in my stories that I am struggling with in real life, heavily disguised in paranormal characters and story lines. I feel this form of creativity, along with many others in my life, are life lines I would not survive without.
Where can readers find you?
You can find out about my other stories at http://www.kikihowell.com
As far as social media goes, you can find me hanging out for the most part at
http://www.facebook.com/kikihowell
About the Author:
Ever since she was young, Kiki Howell has loved to listen to a well-woven tale with real characters, inspired plots, and delightful resolutions. Kiki could spend hours lost in a book, and soon she knew that creating lives, loves, and losses with just words had to be the greatest thing that she could do. To that end, she pursued her study of literature and writing, earning a bachelor’s degree in English. She then followed in a Master’s program in Creative Writing.
“After a long break having my boys, I finally just had to write again. And, as soon as I gave the stories the space, they entered it. It’s both awesome and humbling to find the words in my mind become characters on a page and create their lives.”
She has now had over fifty stories published between eleven different publishers.  She could not be more thrilled or grateful to see her creations polished and out in the real world. Please look around. Although, a bit of caution, most of her stories tend to hang out on the graphically sexy side of town.
In May, 2011, Kiki was chosen as an Ohioana Book Festival author for her novel, Torn Asunder. She’s also had three flash fiction stories win writing contests. Since the fall of 2013, she’s had three novels – Hidden Salem, Salem’s Revenge, and What Lies Within Us – hit Amazon Top 100 Bestsellers Lists in several categories like Paranormal, Suspense, Ghosts, Gothic Fiction, and Occult Horror. Most recently, the second in her Salem Series, Salem’s Revenge, hit the Top 10 on Amazon in Witch & Wizard Thrillers. In October of 2017, Kiki hit the USA Today Bestsellers List.